ISCO3 has been created with the clear intention that it has to turn into an international scientific and moral authority due to the composition of its members; and that its recommendations may become source of reference to all those who practice this medical therapy.

The initial idea of setting up an International Scientific Committee on Ozone Therapy came from Dr. Professor Nabil Mawsouf, former Director of the Unit of Pain of the University of Cairo. Prof. Mawsouf passed away On August 31, 2015.

ISCO3 has been created with the clear intention that it has to turn into an international scientific and moral authority due to the composition of its members; and that its recommendations may become source of reference to all those who practice this medical therapy.

Ahead of us there is long way to walk, and the ISCO3 wants to go ahead with the support, assistance, cooperation and wisdom that national and international ozone therapy associations and ozone therapists may provide. 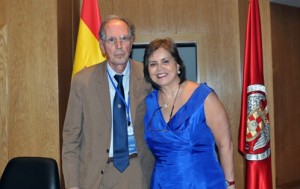 It received the immediate support of Dr. Adriana Schwartz, president of AEPROMO (Spanish Association of Medical Professionals in Ozone Therapy).  It was created a “Working Group” of seven persons (Madrid, June 2, 2010) during the “International Meeting of Ozone Therapy Schools” in Madrid, organized by AEPROMO.

The Working Group issued an international call for membership inviting health professionals dealing with ozone therapy to become one of the 21 members of ISCO3. Sixty applications from America, Africa, Asia and Europe were received.

ISCO3 FOUNDED IN VIENNA ON OCTOBER 8, 2010 AND SELECTION OF ITS 21 MEMBERS

After examining the applications presented; assessing the CV of each of the 60 candidates and the documentation provided; and taking into account the members selection criteria, the meeting unanimously selected the 21 members of ISCO3.

In addition to the 21 members ISCO3 has set a group of “Experts” to support the scientific efforts of ISCO3. Their most important duty is to give opinions, to suggest, to revise and to improve The Madrid Declaration on Ozone Therapy, and in any other subject related to their expertises. Currently there are 39 experts in 22 different health fields.

Every five years the 21 ISCO3 members and a new board are elected. So three international calls for membership to ISCO3 were widely circulated. Based on the high number of applications received the new 21 ISCO3 members were elected on April 2015; and the new ISCO3 Board was elected on May 21, 2025.

Since its foundation in Vienna on October 8, 2010, ISCO3 updated the Madrid Declaration on Ozone Therapy in 2015, approved 25 official documents, founded and kept updated the ISCO3 Online Ozone Therapy International Library, and set up its own web site.

It is the first and only global consensus document in the history of ozone therapy. It has become an important reference tool for health professionals that use ozone therapy. anywhere in the world. The 2nd. edition of the Madrid Declaration reflects the latest medical and scientific advances that have occurred in the scientific world of ozone therapy. The information summarized in the Declaration is based on 2586 scientific publications, books and articles found in the International Library of ISCO3 Ozone.

The 25 papers issued so far may be consulted, free of charge, at the ISCO3 web site.

It contains 2586 records: indexed and not indexed papers, books, thesis, historical papers and other documents. The library is of free access directly from the web site of ISCO3. Its records will increase as new publications appear.